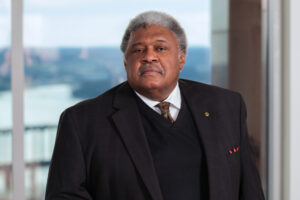 Thomas was born in 1950 and is a native of Norfolk, Virginia. Thomas began his higher education at the University of Virginia in 1968, and four years later he graduated with a Bachelor of Arts degree in 1972. He was immediately accepted into the University of Virginia’s School of Law and graduated with his law degree in 1975. Thomas’ first job was at the law firm Hunton, Williams, Gay & Gibson in Richmond, Virginia where he was the first African American attorney to be employed at this firm. In 1982, he was the first black lawyer in the history of the American South to become partner in a major law firm.

In 1983, Thomas was appointed to the Supreme Court of Virginia by Governor Chuck Robb, at the age of 32. He was not only the first African-American to become a Virginia Supreme Court Justice, but he was also the youngest person appointed of any race or ethnicity. Williams retired from the bench after seven years. Thereafter, he returned to practice law at the newly named law firm, Hunton & Williams LLP (now, Hunton Andrews Kurth LLP) where he continues to practice to this day.

Katherine Johnson was the Newport News resident and brilliant mathematician depicted in the movie, Hidden Figures. 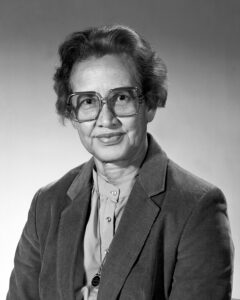 Katherine Johnson lived in Newport News, Virginia from 1952 until her passing in 2020. Although the blockbuster hit Hidden Figures made Johnson famous, Johnson was a trailblazer long before the 2016 movie. Johnson was born in West Virginia. She completed the eighth grade by age 10. Because her town did not offer African Americans classes after eighth grade, her father drove the family 120 miles to Institute, West Virginia, where they lived while she attended high school. After high school, she enrolled in West Virginia State College where she graduated, summa cum laude with degrees in mathematics and French, at the age of 18. Thereafter, Johnson became one of three students to desegregate West Virginia University’s graduate school in Morgantown.

In 1953, Johnson began working for the National Advisory Committee for Aeronautics’ (NACA) West Area Computing unit, where a group of women would manually perform complex mathematical calculations for the program’s engineers. After the formation of NASA, she performed the calculations that sent astronauts into orbit in the early 1960s and to the moon in 1969. Her contributions included performing calculations for the Apollo 11 and the Apollo 13 trips to the moon. When the Apollo 13 experienced a malfunction in space, her contributions to contingency procedures helped ensure its safe return.

Johnson’s work with NACA and NASA was told in the book, Hidden Figures: The American Dream and the Untold Story of the Black Women Mathematicians Who Helped Win the Space Race, which was written by Margot Lee Shetterly. Johnson was also honored with the Presidential Medal of Freedom in 2015.

For more information, see this link and this link, and check out this video:

Ella Jane Fitzgerald is known as the “First Lady of Song.” 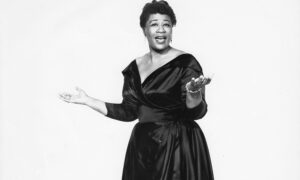 Ella Jane Fitzgerald, was a world renown jazz singer, known as the “First Lady of Song,” whose career spanned over six decades. Ella Jane Fitzgerald was born in Newport News, Virginia on April 25, 1917. Fitzgerald’s stepfather dug ditches and was a part-time chauffeur. Her mother worked at a laundromat. Occasionally, Ella took on small jobs to contribute money to the family as well.

In 1934, Fitzgerald received her first real break in the music industry when she won the opportunity to compete in Amateur Night at the Apollo Theater in Harlem, New York. She went on to become the most popular female jazz singer in the United States for more than half a century. She won 13 Grammy awards and sold over 40 million albums. Fitzgerald worked with other great jazz musicians and singers, including: Duke Ellington, Count Basie and Nat King Cole, Frank Sinatra, Dizzy Gillespie and Benny Goodman. She performed at top venues world-wide. Her audiences were diverse, including people of various races, religions, nationalities, and socioeconomic backgrounds. By the 1990s, Fitzgerald had recorded over 200 albums. In 1991, she gave her final concert at New York’s renowned Carnegie Hall. It was the 26th time she performed there.

Fitzgerald passed away on June 15, 1996 in her Beverly Hills home. Hours later, signs of remembrance began to appear all over the world. A wreath of white flowers stood next to her star on the Hollywood Walk of Fame, and a marquee outside the Hollywood Bowl Theater read, “Ella, we will miss you.”

Carter Godwin Woodson is known as the “Father of Black History.” 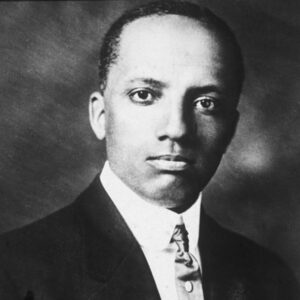 Carter Godwin Woodson was born on December 19, 1875, in New Canton, Virginia. He was the fourth of seven children. In his youth, he worked as a sharecropper and a miner to help his family. Woodson obtained his college degree and then later became the second African American to receive a doctorate from Harvard, after W.E.B. Du Bois.

He dedicated his career to the field of African American history. Woodson is recognized for his work lobbying schools and organizations to participate in a special program to encourage the study of African American history. The program was first recognized in February 1926 as “Negro History Week.” Woodson had chosen February for the initial week-long celebration to honor abolitionist Frederick Douglass and former President Abraham Lincoln who were both born in February. This week-long program later expanded and renamed Black History Month.

Woodson also wrote many historical works. His most notable literary work was The Mis-Education of the Negro which was published in 1933.