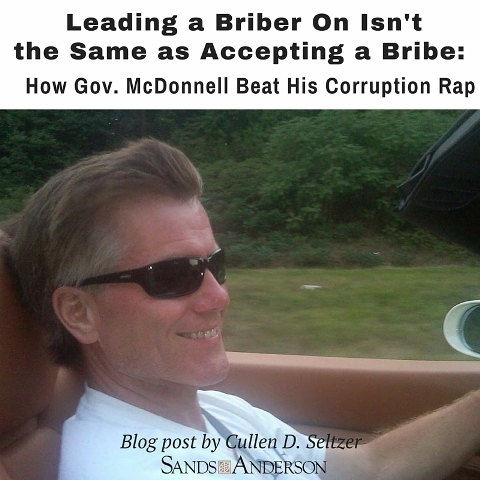 The Supreme Court has reversed Gov. Bob McDonnell’s conviction for bribery under the Hobbs Act.  In ruling his conviction must be set aside, the High Court conceded the case was “distasteful,” but unanimously concluded that the jury in the Governor’s case was improperly instructed on the law concerning bribery.  There are lessons here for prosecutors and government officials. The easiest one to remember: Hobbs Act violations require proof of an “official act” in response to an attempted bribe and an “official act” requires more than just leading the briber on.

By way of background, the Hobbs Act makes it a crime for a government official to commit an “official act” in exchange for loans and gifts.  There was no question that Gov. McDonnell received more than $175,000 in loans and gifts from Star Scientific’s Jonnie Williams.  The gifts included clothing for the Governor’s wife and kids, generous subsidies of the Governor’s daughter’s wedding, business loans with generous terms, luxury vacations, golf clubs, travel, an expensive Rolex watch, and infamously, the Governor’s use of Williams’s Ferrari.  The Governor accepted these inducements at a time when his personal financial circumstances were, if not dire, certainly strained.

And there was little doubt why Williams feted the Governor.  Williams was peddling a “nutraceutical” dietary supplement called Anatabloc made from tobacco.  He hoped Gov. McDonnell could help get Anatabloc favorably researched and reviewed by Virginia research universities and even purchased by the Commonwealth of Virginia as a health plan benefit for state employees.  These efforts would prop up the struggling Anatabloc business.  That it was struggling was not surprising.  Then Virginia Secretary of Health Dr. Bill Hazel testified that he was sufficiently skeptical of the supplement that he wouldn’t “even put the stuff in my mouth.”

When confronted by a grifter like Williams, who testified under a sweeping grant of immunity for his own role as charlatan-to-the Governor, Governor McDonnell not only accepted Williams’s gifts and loans, he also quickly took action to aid Williams’s efforts.  The Governor set up a meeting between Williams and Secretary Hazel, hosted an event at the Governor’s mansion to promote Anatabloc, and followed up with aides to be sure that Williams was receiving the consideration and attention the Governor requested.

The question the Supreme Court decided was whether these efforts amounted to “official acts” on the Governor’s part.  The Court held the jury had been improperly instructed on the meaning of “official acts.”

Simply expressing support for the research study at a meeting, event, or call—or sending a subordinate to such a meeting, event, or call—similarly does not qualify as a decision or action on the study, as long as the public official does not intend to exert pressure on another official or provide advice, knowing or intending such advice to form the basis for an “official act.”

In short, if the Governor was just leading Williams on and never intended aides and cabinet secretaries to actually do anything with Anatabloc, that’s a “distasteful” example of a politician leading a charlatan on, but it’s not illegal bribery.  The Governor’s intentions and expectations when he took calls, set up meetings, and arranged receptions, in exchange for Williams’s largesse, will determine whether prosecutors seek to re-try him for bribery and whether he can be convicted.

The Supreme Court ruled that the jury instructions were flawed for at least three reasons: (i) the jury should have been better instructed on whether Williams’s Anatabloc efforts were a “matter” or “question” that could even be the subject of official action, (ii) just because Governor McDonnell advocated for job expansion in Virginia did not make everything he did as Governor that touched on jobs, or even on Anatabloc, an “official act,” and (iii) the jury should have been instructed that just asking an aide to attend an Anatabloc meeting, without intending the aide to do anything about Anatabloc, is not bribery.

These are, to say the least, fine distinctions.  The Supreme Court is trying, mightily, in this case to do two things.  First, it is trying to make sure those officials who accept bribes and then do as they are bribed to do, can still be punished under the Hobbs Act.  Second, it wants to make sure those officials who take routine phone calls and set up routine meetings with constituents and political and business allies are not falling into a bribery trap they don’t intend.  (Of course, the easiest way to dispel suspicion of a bribe might be to decline the inducements offered by “friends” selling strange tobacco pills, but that issue was not before the Supreme Court.)

This line drawing by the Supreme Court should be some comfort to politicians doing the right thing.  They now know that when they engage in the day to day work of talking to and helping constituents, that’s not a hidden land mine for a bribery conviction.  On the other hand, politicians looking to exploit their position for their personal gain now know that there is a narrow path they can tread between mere communication and “official acts.”  Savvy politicians with avarice in mind will learn that if they are careful they can accept the Rolexes too many of their new found friends are too happy to give them in exchange for just a little more access.