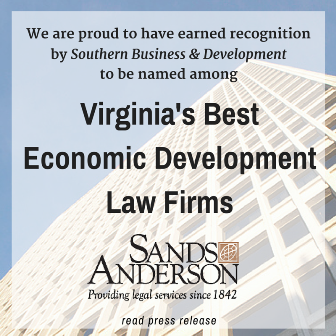 Sands Anderson was selected by the members of the publication’s Southern Economic Development Roundtable at their annual meeting in January. The Roundtable members include current and former Secretaries of Commerce along with educators, economists, consultants and local economic developers. The top three vote recipients for each of the 30 categories are cited.  In the case of a tie, a fourth winner is listed.

The recognition is in the Winter 2016 issue of Southern Business & Development released in March/April which features the “Best of Economic Development in Texas, Virginia and West Virginia.”

“We are extremely pleased to receive this recognition and to be selected as a top Virginia law firm for economic development. It’s a privilege to work with local governments throughout the Commonwealth, as well as businesses and developers on important projects that enhance the economic vitality of Virginia’s communities,” said Daniel M. Siegel, shareholder and Chair of the firm’s Government Group.

Southern Business & Development is a media property that has covered economic development in the American South, the world’s fourth-largest economy, for more than 20 years. Southern Business and Development is frequently quoted by CNN, Time, AP, ABC News, Fox News, CNBC, MSNBC, PBS, The Huffington Post, Yahoo, the BBC and dozens of other electronic media and in publications such as The Wall Street Journal, The Weekly Standard, USA Today and The New York Times. The magazine’s per issue circulation averages 12,814.

Founded in 1842, Sands Anderson PC provides innovative legal solutions to clients throughout the Mid-Atlantic region with top-tier attorneys. Our firm represents businesses, healthcare providers, financial institutions, state and local governments, the insurance industry, and individuals from our five offices located throughout Virginia and North Carolina. Sands Anderson’s shareholders are committed to providing an innovative and inclusive workplace for our lawyers and staff, as well as supporting the economic growth of communities where we operate.

Sands Anderson Approves 2022 Board of Directors